Your friends the stars – 12 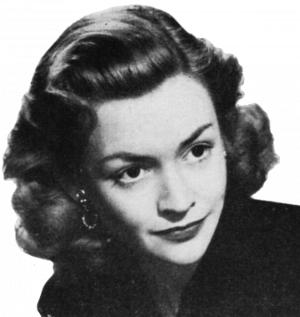 More than one motherly viewer who has seen her in TV plays has telephoned Ursula Howells to advise her how to get some happiness into her life. She has had to play so many neurotic, ill-treated women, that some viewers have convinced themselves that she must be unhappy in real life!

She is, however, happily married to an industrial consultant; and the only time she gets anywhere near “the mopes” is when his business takes him abroad and she is missing him.

Despite her run of tragic TV parts, she says she is very happily “at home” at Lime Grove. She has worked so much in TV that she finds the job like working among friends. Even the dingy rehearsal rooms she likes, as familiar places, full of the memories of other happy occasions in preparing previous plays.

It was the theatre, however, that gave Ursula her TV debut. That was when a West End theatre production of the play Frieda was taken to the Alexandra Palace studios. To this West End part Ursula had come by dint of hard work in the provinces.

At the time of evacuation in the last war, Herbert Howells, Ursula s famous composer father, decided his daughter had best move from London to Dundee. The girl, hardly out of her teens, began to get back-stage jobs at the local repertory theatre. A chance came for her to start playing parts.

Then the producer Anthony Hawtrey went to Dundee, promoted Ursula to leads, and took her with him when he took over the management of that “shop-window” theatre in London, the Embassy.

Soon Frieda followed, then other West End parts, good supporting roles in films, and a string of TV parts. She went with Patrick Barr and Peter Cushing to Germany with the TV play Portrait of Peko, which the BBC “exported” to the German Radio Show.