Your friends the stars – 3 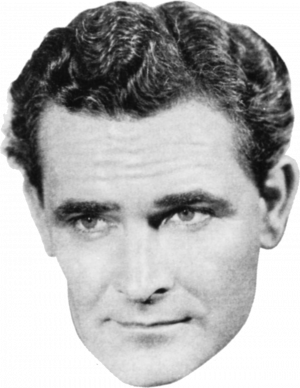 His is the radio voice which, when transferred to TV, revealed that it partnered an appearance quite able to match the handsomeness in the voice-box. For some time Donald Gray had been a frequent actor in radio plays. His broadcasts in this sphere were somewhat confined to villainy, because the BBC radio producers seemed to think the “deep-brown’’ voice more suited to that than to heroics.

Donald was in fact in the BBC Drama Repertory Company for three years. He then took the usual series of tests for TV announcing, followed by a trial on the screen as a guest announcer. He is now a regular relief announcer, whose early hesitancies have consolidated into a personable manner very human in appeal, and in nice contrast to the personality of McDonald Hobley.

He was born in South Africa, and began work there, not in the theatre but on an ostrich farm. His acting urge brought him to Britain, where there are more stage opportunities. He worked with a number of repertory theatres, and then got into films. The war interrupted this, and in 1944, in a fierce action during the advance on Falaise, he lost his left arm.

When he afterwards starred with Linda Darnell in the film Saturday Island, the script was adapted to take account of his one-armed-ness. At Lime Grove they tell a human story of his announcing test. There were other candidates there, nervy in a suspense-taut studio. The studio manager, to put them at their ease, asked each in turn to relate some happening in his life. Simply and straightforwardly, without heroics or pathos, Donald told how he lost the arm. The tension in the studio vanished, leaving instead a sense of comradeship and inspiration which was helpful to all.