Your friends the stars – 8 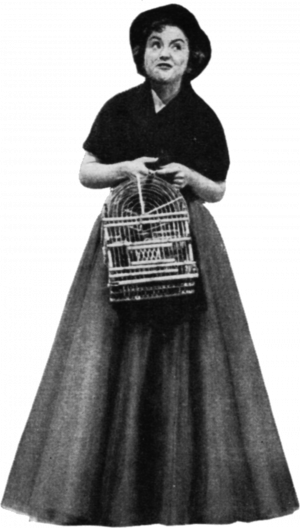 This attractive comedienne with the beautiful voice tells the story of her ascent to stardom in her own way:

“I started in show business when fourteen — and the show was called Hot From Hollywood! It was at the Queen s, Poplar. Imagine what a fat podge I was at that age — with fringe, short socks, and Shirley Temple dress; and I had the nerve to sing Grace Moore’s ‘One Night of Love’

“After that first show I got the push for telling the theatre boss what I thought of him — and of myself. And I didn’t get back into the business until I d swallowed an awful lot of pride. Meanwhile I took jobs in shops — usually sweet-shops, where I could chew as I worked. This did not make me very popular with the shopkeepers. Then I did an audition for Carroll Levis, but he passed me over. Since then we’ve worked on the same bills and often laughed about that audition.

“I went out in a revue called Overnight Success. I wasn’t. But it went on, I going from digs to digs all over the country, until I met my husband. I was now seventeen. The war came, and he went into the Navy. When he had got himself sunk four times, we got married before he had a fifth wetting. He is a solicitor in Lincoln, where our home is.

“I left the stage for four years after getting married. For some reason, when I came back, I got on like a house on fire. But since I got on, I worry more. The old story — ‘It’s tough at the top’ — is very true. Nowadays, while my baby daughter is so young, I spend most of my time in London at Mum’s. Everything is going so wonderfully for me, I can’t believe it’s true — a radio series, TV, Blackpool last summer with Jimmy Edwards, a lovely baby, and good health … I’m paralysing my hands keeping my fingers crossed!”