Your friends the stars – 11 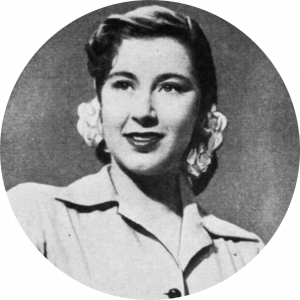 Twenty-four is a grand age for a girl to find her engagement book crammed full, to have a fashionable flat in Mayfair, an expensive car, and as many clothes as she wants. These are the marks of good fortune which have come to Shirley Abicair.

This Australian girl was a university student in Sydney when she started singing at private parties to earn a bit of money towards her educational fees. Accompanying herself on a zither, unearthed in the Abicairs’ musical home, she entered a radio talent contest and won a radio series as a result.

Shirley often talked of her ambition to come to London to storm the BBC. In the end she took the chance, and flew to Britain—stopping twice en route to sing in cabarets in order to earn her fare. Because she looked attractive, a photographer snapped her leaving the plane at London Airport. A BBC sound-radio producer saw the picture in an evening newspaper. He wanted another act for a radio show by Commonwealth artists, and asked Shirley to bring her zither along. Geraldo heard the broadcast, and fixed her a concert date at Bournemouth. He also got her an audition for a new London show.

In the theatre as she took her audition was TV producer Kenneth Carter. Impressed, he gave her the Centre Show date which so memorably made her an instant TV success. Those were the strokes of good fortune which not only enabled Shirley Abicair to streak to the top, but also challenged her to polish her talent and so maintain her position.

So much work has gone into that, as well as into collecting folk songs for her act, that she says she has had no domestic life at all in England yet. In 1954 she sent for her air-hostess cousin, Maureen, to come from Australia and act as her manager. This Maureen did; and the Abicair business, founded on good luck and nerve, looks surely to the future.