Skip to content
LIFE with Bill is exciting; it is fun; it is happiness. It is days alone together; and it is days spent with our children. And I guess it is just like any other happy marriage, with one difference. I have to share him with a whole lot of other people.

What worries me is that so many people think being married to a celebrity gives one a special know-how, and you would be surprised how many people write asking me to give them my recipe for a happy marriage.

Bill and I don’t have any formula, and so far as I can tell you only one rule: Never be parted from each other for more than three weeks. It works out this way: if Bill is on tour either abroad or in the States and I have stayed at home with the kids, at the end of those three weeks I hop a plane and join him for a couple of weeks. Then I come back home to be with the children.

Before I tell you all about life with Bill, let me put over just one other point. Bill’s story is not one of overnight success. I know rock ’n’ roll hit this country like a hurricane, and it swept through the States in the same way, but it took many, many months of research with Bill and his group touring round school assembly halls to find out just what kind of music youngsters wanted. Then it took quite a time to convince people that he was right. Believe me, when we were married five years ago, Haley’s Comet was not shining half as brightly as it is today.

How does a girl like me get to know a guy like Bill? In the States it is the usual thing for a gang of girls to go night-clubbing together. Over here I guess that sounds dreadful, but it is different in America. You go in a gang and you will find that there are a lot of unescorted males at these clubs, too. You sit around for an odd drink and dance to the resident band and it was in this way that I met Bill.

Some of the girls that I had been going around with told me that over in a New Jersey night-club was a new outfit which was real smooth and that I ought to go out with them and hear it. Gee, they gave this band such a build-up that wild horses couldn’t have stopped me from going. We had a lot of fun on that Saturday night and after a while I went up and asked Bill for a request number. I asked him if he would play It’s A Sin.

Now let me put one thing quite right in your minds — I did not go up and ask him for his autograph. Sorry if it spoils the story, but it just isn’t true. Well, I went back there every week after that and one night when I was sitting at a table with the gang. Bill Haley came up and said: “It’s A Sin?” I replied: “Sure, I would love to hear it again.” After that he would sit at the table and talk to me for a while every time I went.

He didn’t date me until we’d been meeting this way for well over eight weeks and we did not get married until we had known each other for a year and a half — and that was after his parents had approved of me and mine of him.

When I met him I was working in a chocolate factory. Today, of course, I don’t have to worry about money, we live very well and the family’s future seems secure.

We have three lovely children. There is Joan, four, Billy Junior, eighteen months, and little Jimmy who is just five months. Leaving Jimmy behind and coming to England was a terrible wrench. But Bill wanted me to come with him and I couldn’t bear to be parted from him so shortly after his tour of Australia, when I just was not able to join him because of Jimmy — that’s the first time we had departed from our three week rule.

However, don’t feel too sorry for the kids. When we are away they have a pretty good time. My mother moves into our house and my father just about gives up his job to be with her. Grandparents are as crazy about their grandchildren in America as they are over here.

Now, about our house. We have a lovely home in the country with seven acres of ground. I won’t say garden because we haven’t got around to it yet, but we are going to, and if time permits, we are going to do a lot of it ourselves.

We live in the state of Pennsylvania, and the nearest town is about ten miles away. It’s a place called Chester, but not very much like its counterpart over here, though I guess it’s about the same size.

I have seen references in the paper to our large staff. Well, the house is a big one; it’s usually full up with the band and their wives, Bill’s manager and agents. So, apart from being our home, it’s a sort of rehearsal hall as well. It has to be big. As to staff, we have a housekeeper, a nanny and a maid.

How do we spend our time when Bill is not working? Well, if he has got a day or two off, daughter Joan usually takes over. She sure has got Bill trained! Near where we live there is a zoo and a children’s playground and off we go just like any other family.

I do have one big complaint and that is that Bill is a crazy fisherman and I loathe fishing. He has tried to make me like it but it is just no good. However, I know how to get my revenge because I love dancing and Bill, believe it or not, loathes it! So if he decides to go out for the whole day fishing and comes home dead beat, there I am all dolled up and ready to go out for the night dancing.

Bill changes with fairly good grace — perhaps he feels a little guilty for having fished all day — and takes me, but it works out all right. He does not fish too often and I don’t make him go dancing too often.

If I have any other faults to find with Bill, it is that he cannot stand being alone, and quite often in the evenings when all I want to do is to sit at home quietly listening to music or watching television, he will jump up and say, “Let’s have some folks in and play canasta.”

Another thing is Bill’s love of the colour red. He will hardly notice what I am wearing unless it is red and when you are an ash blonde like I am, red is hardly the right colour. He has only bought me one dress in my life and I don’t need to tell you what colour it was!

Talking of clothes, once when Bill was in Hollywood on his own he bought himself twenty sports shirts and fifteen of them looked alike to me — all bright red!

There has been a lot of speculation as to how I got my nickname of “Cuppy,” but it is quite simple really. My maiden name was Cupchak and as a kid I was known as “Cupcake.” I guess you have cupcakes over here — small, sweet, sugared cakes — and “Cupcake” is quite a compliment. Well, from Cupchak to “Cupcake” to “Cuppy” is no great jump. So, instead of being Joan I am now “Cuppy,” and I like it.

OK, so you have been waiting for me to open up about the Haley curl. Do I like it, do I loathe it, is it natural or do I have to set it for Bill each night? All I can say is that Bill has had it ever since I have known him and I am so used to it now – that I would miss it if it went.

As a kid his hair was curly and this particular piece of hair has remained unruly throughout his life. Now it has become a gimmick, and I don’t think Bill would be Bill without it; any more than Liberace would be Liberace without his candelabra.

One thing I have found is that all Bill’s fans are very kind and whenever they write to Bill there is invariably a message for me, asking him to give me their regards. Now I call that real kind and it gives me a sense of pride in my husband’s popularity.

My views on rock ’n’ roll are unimportant, but I would like to say that I love it. My taste is not limited, however, and I am just crazy over your Mantovani. Believe me, I am taking plenty of his records back home.

I also do a lot of reading, and Bill is always threatening to catch up on it, too. I like biographical works myself and at the moment am reading everything I can on Marie Antoinette. I think this historical phase has been heightened by being able to see so much history around me while I was in Britain. Like Jack Benny I just could not believe your Crown Jewels are real. I have not seen anything so beautiful in my life. That is why I hardly wear any jewellery at all. I love genuine jewellery but I will not wear fake. Maybe when Bill reads this he’ll take the hint! 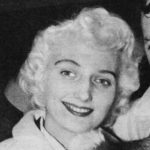 Barbara Joan "Cuppy" Cupchak was married to Bill Haley from 1952 to 1960. They had 5 children before they divorced.

Tags: Bill Haley, Bill Haley and His Comets, Cuppy Haley, It's a Sin